High-Dose
B Complex Forte
With Cofactors

SKU
4546
Skip to the end of the images gallery
Skip to the beginning of the images gallery
High-dose, bioactive B complex with all eight B vitamins and four cofactors. Supplies five different active ingredients of B12 from our MH3A® formula, the rest of the B complex in the form of highly bioavailable and ultra-pure vitamins, plus the cofactors choline, inositol, betaine and PABA. Suitable for individuals with high B12 requirements: includes a total of 800µg bioactive vitamin B12 from all three natural cobalamins. Vegan, no additives. Laboratory tested. 60 capsules
In stock

Every B vitamin occurs in a variety of chemical forms. These can be divided into two subcategories: the synthetic forms, which cannot be found in nature and cannot be utilised by the body without first being converted, and the directly active, bioidentical forms, which have an immediate effect in the body. In our B Complex Forte, we use only the optimally bioavailable active and bioidentical forms, which the body can use directly. The only exception is vitamin B1, which in its active form is not permitted as a food supplement in Germany.

Some of the B vitamins, such as vitamin B12 and folic acid, have several naturally occurring forms:

Although standard practice to supply vitamin B12 in an isolated, synthetic context, our pioneering MH3A® formula offers the vitamin in the same way as it occurs in food: as a mixture of all three natural and bioactive forms, which allows the natural synergistic effects between them to occur (they each fulfil completely different tasks in the body and have different focal points of action). Our MH3A® formula contains these three forms of vitamin B12 in an equal ratio, spread across a total of five active forms of B12. This formula thus provides a foundational supply of vitamin B12 as found in nature, where all three forms are always found in a harmonious combination, both in our bodies and in the foods we eat. In contrast, the majority of products available on the market contain only one of the three B12 active ingredients: either methylcobalamin, hydroxocobalamin or adenosylcobalamin.

Conventional folic acid, which is used in many food supplements, is an artificial, synthetic product which cannot be utilised directly by the body; synthetic folic acid must first be converted to active folate in the body, a process requiring cofactors and enzymes which are not necessarily always in sufficient supply. Our unique folate complex consists of a combination of two bioactive, patented forms of L-methylfolate: the glucosamine salt Quatrefolic® and the highly bioavailable calcium salt Magnafolate® Pro, both of which provide 99.9% pure L-methylfolate. They both offer fast and effective absorption of the bioactive L-5-MTHF, with the form offering the better absorption of the two differing from person to person. Our folate complex thus ensures that the body is always supplied with sufficient folate in an ideal form.

For the capsule shells we use custom-made HPMC capsules that, unlike most other HPMC and pullulan capsules on the market, are 100% free from controversial additives such as carrageenans and PEG. We then package this product in environmentally friendly amber glass.

The B vitamin group includes eight water-soluble essential nutrients: vitamins B1, B2, B3, B5, B6, B12, biotin and folic acid. Unlike many vitamins, B vitamins cannot be stored in the body over a long period of time and must therefore be obtained daily through food. The only exception is vitamin B12, which can be stored in the liver.

It is crucial to ensure a balanced intake of all B vitamins due to their interdependent effects, but this is sometimes difficult to achieve due to their wide distribution across all food groups; only a very balanced diet can provide all B vitamins in sufficient quantities. Indeed, large nutrition studies consistently reveal clear gaps in their supply.

There are several vitamin-like nutrients that work together with the B vitamins as cofactors. Due to their close interaction, these compounds were considered B vitamins themselves until recently.

Health Benefits of B Vitamins

According to the European Food Safety Authority (EFSA), B vitamins contribute to:

The official daily requirement (NRV) for each B vitamin can be found below:

There are no official requirements for choline, inositol or betaine. All three can be synthesised in the body, so many people cover their daily needs endogenously. The following recommendations for dietary supplementation are stated in the literature:

Do not exceed the recommended dose. Food supplements cannot replace a balanced and varied diet. Keep out of reach of children.

Store in a cool, dry place away from direct sunlight and heat. 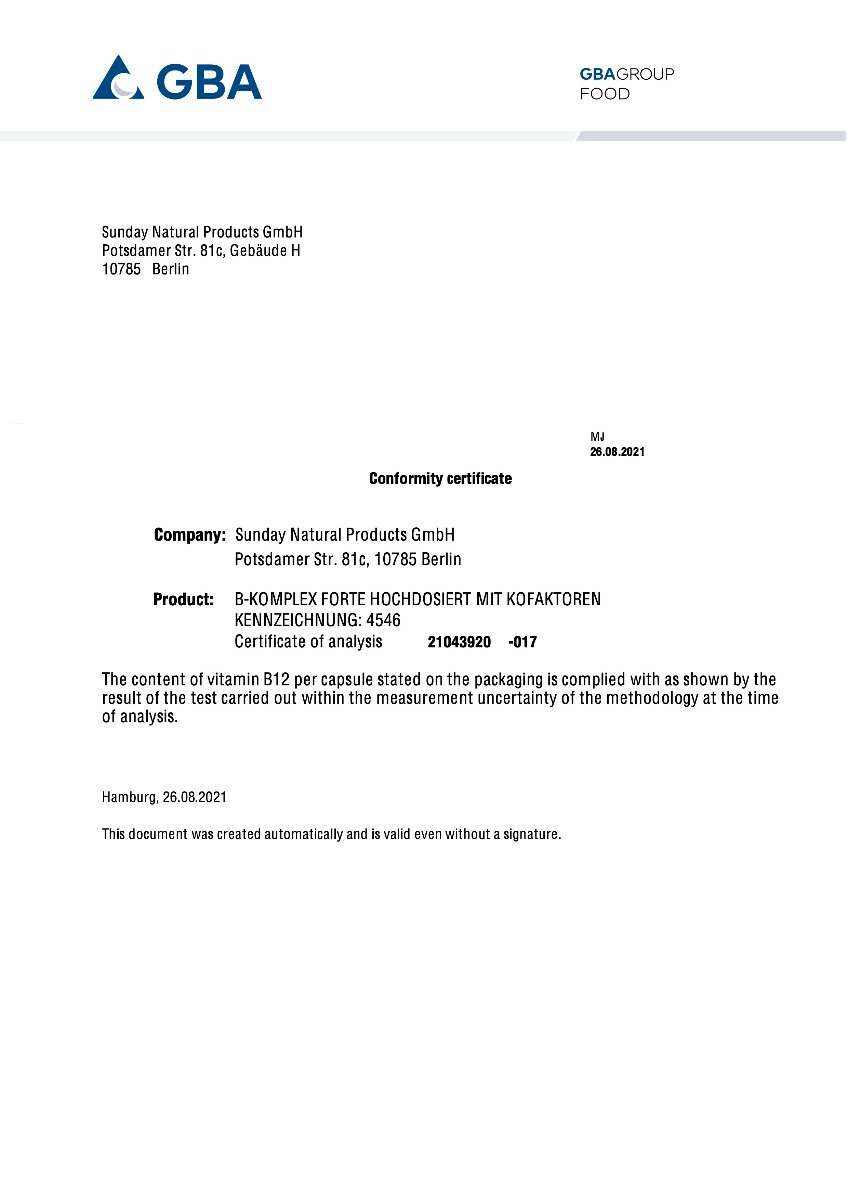