SKU
5121
Skip to the end of the images gallery
Skip to the beginning of the images gallery
Each lozenge offers 1,000µg of vitamin B12 from our MH3A® formula (providing a total of five B12 active ingredients) and 400µg of our bioactive folic acid complex (L-methylfolate from Quatrefolic® + Magnafolate® Pro), as well as a natural folate complex from lemon peel cultivated without the use of plant protection products. Natural guar gum lozenges, no artificial additives. Non GMO. 100% vegan. Made in the EU. 120 lozenges
In stock

Conventional vitamin B12 and folic acid supplements usually contain only one active ingredient for each vitamin. However, several active forms of B12 and folic acid occur in our bodies and in natural foods. All forms exhibit different effects and are metabolised in part via different pathways, resulting in absorption rates unique to every individual. By combining two high-quality active ingredient complexes containing all their active and natural cofactors, both vitamins can be optimally absorbed.

Although standard practice to supply vitamin B12 in an isolated, synthetic context, our pioneering MH3A® formula offers the vitamin in the same way as it occurs in food: as a mixture of all three natural and bioactive forms, which allows the natural synergistic effects between them to occur (they each fulfil completely different tasks in the body and have different focal points of action). Our MH3A® formula contains these three forms of vitamin B12 in an equal ratio, spread across a total of five active forms of B12. This formula thus provides a foundational supply of vitamin B12 as found in nature, where all three forms are always found in a harmonious combination, both in our bodies and in the foods we eat. In contrast, the majority of products available on the market contain only one of the three B12 active ingredients: either methylcobalamin, hydroxocobalamin or adenosylcobalamin.

In order to achieve wide structural diversity, our unique Folate Complex Ultra consists of a combination of three premium folates: the two most bioactive L-methylfolates available, the glucosamine salt Quatrefolic® and the highly available calcium salt Magnafolate® Pro, and a full spectrum of natural folates obtained from an extract of lemon peel. Both patented ingredients provide 99.9% pure L-methylfolate and complement each other by quickly and effectively allowing the absorption of bioactive L-5-MTHF through different metabolic pathways. Quatrefolic® can be directly utilised by the body. It is a patented ingredient in which methylfolate is bound to glucosamine (a natural component of many body tissues) for stabilisation, ensuring high effectiveness throughout its long shelf life. Magnafolate® Pro consists of highly bioavailable L-methylfolate in the form of L-5-methyltetrahydrofolate bound to calcium salt in a patented C-Crystal form. It ensures an extremely high absorption rate: first-pass absorption allows 76% of the active ingredient into the blood (it can even cross the blood–brain barrier). Due to their extreme purity, high stability and outstanding bioavailability, Quatrefolic® and Magnafolate® Pro are the two highest quality and most effective forms of L-methylfolate.

The advantage of lozenges is their ability to be directly absorbed through the mucous membrane of the mouth by means of passive diffusion. The citamins can then enter the bloodstream directly, without first passing through the liver—as would be the case with intestinal absorption. As a result, any potential digestive difficulties in the gut can be completely avoided, significantly increasing bioavailability.

Our high-quality lozenges are based on non-GMO guar gum, allowing us to completely omit the controversial yet common additives in conventional lozenges, including magnesium stearate, sweeteners, colourings and animal products such as gelatine.

Vitamin B12 performs a variety of important functions in the body: it can help to reduce tiredness and fatigue and to maintain normal energy metabolism, it contributes to the normal functioning of the psyche as well as the immune and nervous systems, it plays a role in the formation of red blood cells (also known as erythropoiesis) and it supports normal homocysteine metabolism, as well as being required in the process of cell division. Vitamin B12 also acts as a coenzyme in the body. This means that certain enzymes in our body require B12 in order to fulfil their tasks. In other words, many enzymatic reactions are directly dependent on vitamin B12 and cannot take place without it.

Vitamin B12 (cobalamin) occurs in a variety of different chemical structures, all of which perform different tasks in the body. The natural forms of vitamin B12, which can exert a direct effect on the body, are considered bioactive coenzymes. Synthetic forms of vitamin B12, such as cyanocobalamin, must first be converted into a natural form by the body in order to be effective.

Methylcobalamin and adenosylcobalamin are the bioactive coenzyme forms of vitamin B12. Because they each have different areas of action and take part in completely different reactions, the body is able to convert these forms from one to the other. Methylcobalamin plays a role in the methylation cycle within the cell plasma, a far-reaching function influencing various body processes from blood cell synthesis to the functioning of the nervous system. Adenosylcobalamin, on the other hand, takes effect in the mitochondria, the powerhouse of the cell. There it plays a role in the citrate cycle, the central metabolic cycle for energy production. The third natural form of vitamin B12 is hydroxocobalamin, a form which can be found in many foods. It makes up a significant amount of the total B12 in the blood and binds particularly well to vitamin B12 transport molecules. It is thus not excreted as quickly; hydroxocobalamin is the form of B12 with the highest capacity for building long-term stores in the body and can be easily converted into either of the two active coenzyme forms as needed.

Folate, also known as vitamin B9, is involved in a variety of important body functions. This essential vitamin contributes to energy metabolism, it can reduce fatigue and tiredness and it supports the immune system as well as mental functioning. It is required for haematosis, cell division, homocysteine metabolism and forming amino acids. Folate also plays a role in the growth of maternal tissue during pregnancy.

Synthetic folic acid must first be converted into folate in order to be bioactive. This conversion cannot always proceed in the body without issue, as a number of cofactors and enzymes are necessary for it to occur. The optimal, biologically active form of folate is called L-methylfolate (or, more precisely, L-5-methyltetrahydrofolate, or L-5-MTHF). L-methylfolate is an important methyl donor and an essential component of the methylation cycle.

Health Benefits of Vitamin B12

According to the European Food Safety Authority (EFSA), vitamin B12 contributes to:

Health Benefits of Folate (Vitamin B9)

According to the European Food Safety Authority (EFSA), folate contributes to:

We recommend placing the lozenge under the tongue or in the cheek and allowing it to dissolve for as long as possible without swallowing.

The German Nutrition Society (DGE) recommends a minimum intake of 3µg vitamin B12 per day for adults.

According to European authorities, the official daily folic acid requirement for adults is 200µg. The German Nutrition Society (DGE), however, recommends a daily average of 300µg for adults. The DGE notes an increased requirement for individuals who are pregnant (550µg) or breastfeeding (450µg).

The human body can only absorb a portion of the vitamin B12 found in food and supplements: only about 1–2µg of vitamin B12 can be absorbed at a time via the intrinsic factor, a special protein, with a further 1% absorbed via passive diffusion through the intestine. Calculating total B12 absorption therefore requires taking both of these factors into account. Note: By distributing intake of B12 throughout the day, absorption via the intrinsic factor can be maximised.

Do not exceed the recommended dose. Food supplements cannot replace a balanced and varied diet. Keep out of reach of children.

Store in a cool, dry place away from direct sunlight and heat.

Vitamin B12 and folate work together closely in the body and can only unleash their full potential when both are available in sufficient quantities. Both cofactors are necessary to convert harmful homocysteine into methionine.

In many cases it is therefore advantageous to take both vitamins at once. An imbalance between B12 and folate can lead to a functional deficiency, while proper efficiency is only guaranteed with a sufficient supply of both.

In cases of a B12 deficiency, abnormal folate metabolism can lead to methylfolate build up, which in turn can cause negative side effects including irritability and soreness. 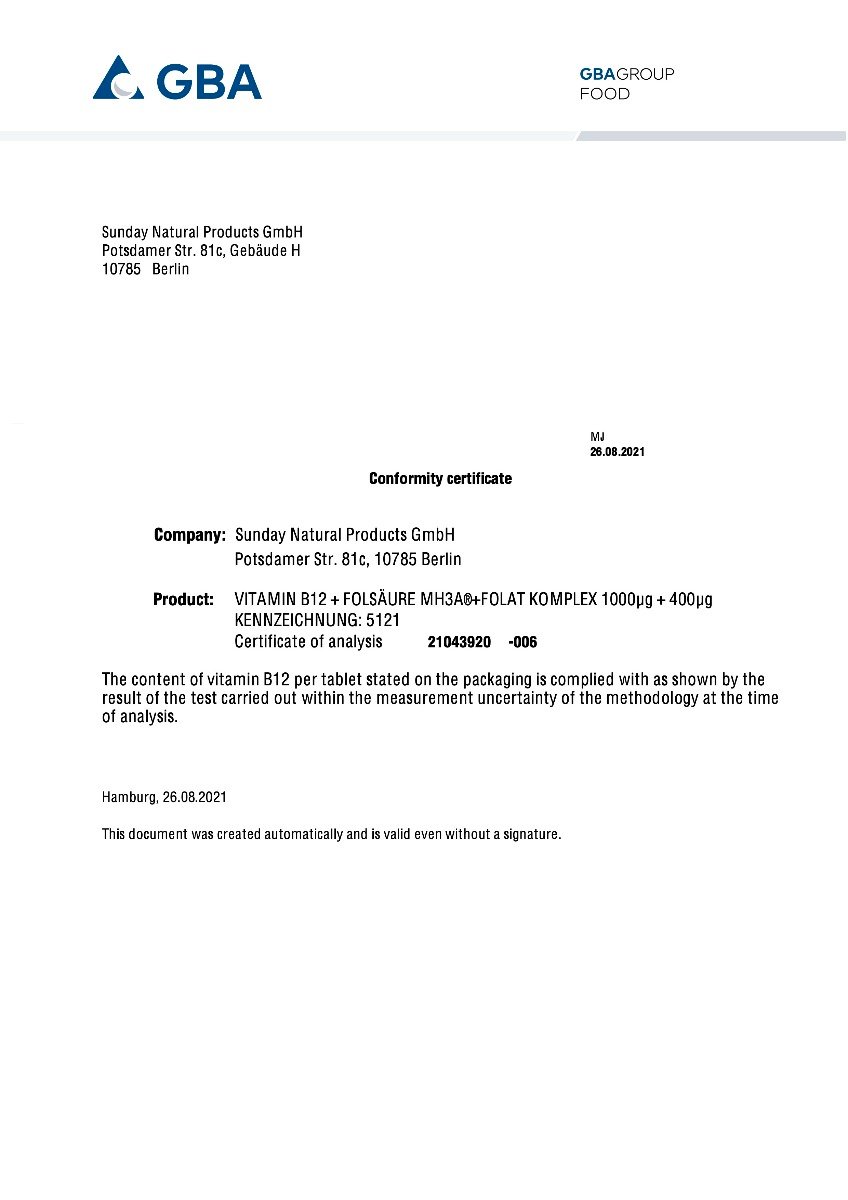